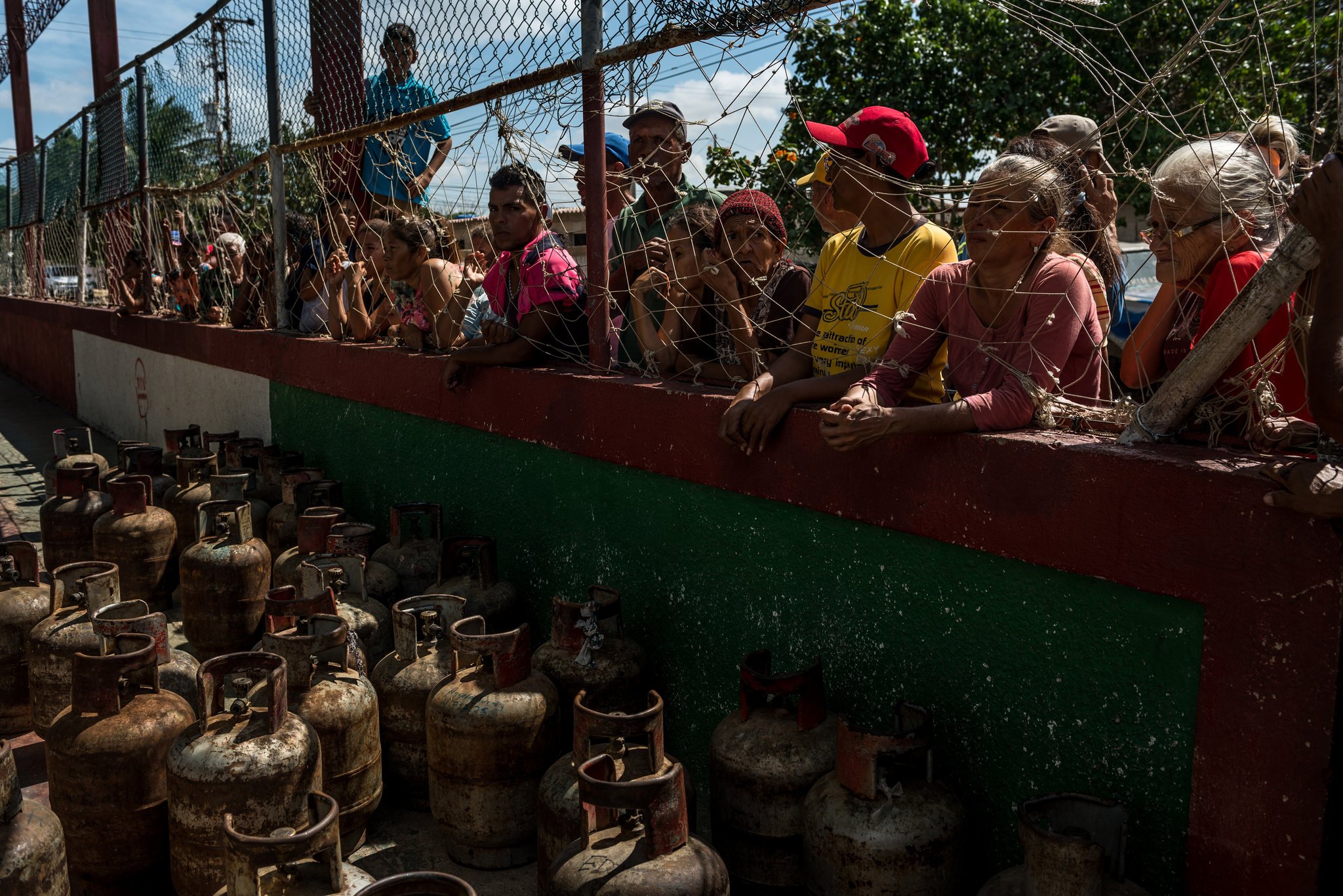 PUNTO FIJO, Venezuela — A general with no energy experience has been installed as the head of the state oil company. Arrests, firings and desperate emigration have gutted top talent. Oil facilities are crumbling, while production is plummeting.

As the rest of the oil-producing world recovers on the back of stronger energy prices, Venezuela is getting worse, the result of dysfunctional management, rampant corruption and the country’s crippling economic crisis. The deepening troubles at the state oil company, the country’s economic mainstay, threaten to further destabilize a nation and government facing a dire recession, soaring inflation and unbridled crime, as well as food and medicine shortages.

When energy prices started to crater several years ago, Venezuela and other oil-dependent nations suffered in tandem. Now, prices are rising and others in the oil patch are on the mend.

Saudi Arabia’s government is slashing its deficits and reaping increased revenue. Even dysfunctional Libya and Iraq have been pumping and exporting like mad.

Not Venezuela, the country with the largest proven reserves in the world. The state-owned oil company, Petróleos de Venezuela, known as Pdvsa, teeters on the brink of collapse, its failures at once a symptom and a cause of the nation’s downward economic spiral.

The reasons can be clearly seen at the sprawling oil refining complex here on the Caribbean coast. Once the crown jewel of Venezuela’s oil industry, it not only fueled the country’s booming economy but also produced an abundance of lucrative gasoline and diesel for export.

Today, the complex is in severe decay. A lack of investment compounded by cash flow problems and chronic shortages of spare parts have crippled operations, critics say.

It is closing out the year operating at only 20 percent capacity, with 76 of 84 plants paralyzed, said Iván Freites, a union leader and outspoken government critic. The complex does not have the computer software to diagnose its production problems, nor the money to fix them if they did.

With facilities around the country in disrepair, Venezuela has been unable to take advantage of rising prices by pumping out more oil and ramping up refinery operations. Production is falling 20,000 barrels to 50,000 barrels a day month after month and is now at its lowest level in nearly three decades.

As it sells less oil, Pdvsa is falling behind on its debt payments. It is quickly turning into a liability that could force the country into default.

“With production going down and down, there is a spiral of less cash and less investment and less production,” said Francisco J. Monaldi, a Venezuelan oil expert at Rice University in Houston. “I don’t think there has ever been such a collapse in cash flow of any national oil company.”

Pdvsa’s production problems have been exacerbated by the turbulence in its leadership. In the last few months, the government of President Nicolás Maduro arrested scores of managers on corruption charges. Mr. Maduro says the prosecutions are an effort to clean up the company. But critics view the sweep as a political purge by the Mr. Maduro to consolidate power ahead of presidential elections next year.

And last month, the president appointed Major General Manuel Quevedo to run both Pdvsa and the oil ministry — though he had no known experience in the energy sector. Critics viewed the move as a transparent effort by Mr. Maduro to safeguard against a coup.

Luis Giusti, who ran Pdvsa before President Hugo Chávez came to power in 1999, said Mr. Maduro’s purge was “more of a political campaign to see if they can have some breathing room because everything is going down the drain.”

“They have been managing the corporation for 18 years and then all of a sudden they are saying now they are going to rescue the corporation,” he added. “Rescue from whom?”

For generations, Pdvsa delivered mightily on the promises of Venezuela’s oil reserves, funding the nation’s socialist-inspired revolution and making it one of the wealthiest countries in Latin America. But production in recent years has plummeted so far that Pdvsa is no longer able to meet domestic demand for diesel and gasoline, forcing the country to import increasing amounts of both, including from the United States.

Pdvsa is also sagging under the burden of immense debt. It has been effectively in default on its $26.5 billion in unsecured bonds since early November, and it owes roughly $60 billion more to its service companies that drill and maintain its fields.

The Maduro administration has insisted that it intends to continue to make payments on its debts, and investors have been largely tolerant of payment delays. But Pdvsa’s financial health has become so perilous that Cuba, Venezuela’s closest ally, recently took the company’s 49 percent share in a Cuban refinery as payment for outstanding debts.

This company’s struggles are particularly evident in the two sprawling refineries that bracket this small city and form part of the Paraguaná Refining Center, one of the largest refinery complexes in the world.

As recently as 2015, the center, with a capacity of nearly a million barrels a day, was processing about 587,000 barrels a day, according to Pdvsa’s website. The crude was converted into a range of products, including gasoline, jet fuel, asphalts and lubricants.

But the refineries, like most of the company’s facilities around the country, have fallen into grave disrepair. The situation has forced severe cutbacks in operations, leading to layoffs and an increase in accidents and injuries, workers and union leaders said.

The refineries have been recently plagued by a series of mishaps.

In late October, some 200,000 gallons of gasoline and other products spilled from a slop tank in one of the refineries, Amuay, into the adjacent bay. The spill killed wildlife and forced local fishermen to suspend fishing for weeks.

Then an overworked pump in the same refinery failed, leaving operational only two of five distillation units, a key part of the refining process, workers and union leaders said.

Days later, a fire broke out in a separate refinery, Cardón, leaving only one of five distillation units functioning. Workers reported that the emergency crew that responded could do little more than to watch the fire burn out on its own. They had run out of firefighting foam.

In the midst of it all, production came to a near-standstill, dropping to just 13 percent of capacity in early-December before rebounding slightly, Mr. Freites said. Three of Amuay’s distillation units and two at Cardón were functioning this week, the union leader said on Wednesday, but he added that another fire had broken out in Cardón on Tuesday causing injuries.

The disintegration of the refineries has left many workers dispirited.

Employees have lost all interest, said Emilio, a worker in the Cardón refinery who asked that his last name be withheld because he feared punishment by the authorities for criticizing the company. He said they were simply punching the clock.

Wage increases have lagged far behind soaring inflation and workers have seen their purchasing power drop markedly and benefits reduced sharply. Some employees have been forced to sell their gloves and helmets to put food on their family’s dinner table, workers said. Pride of association with Pdvsa has evaporated.

Before, people would be devastated if they lost a job at Pdvsa, said José, a worker in the Amuay refinery who also asked that his last name be withheld because he feared retribution from his bosses for speaking publicly about the company. Now, he said, many dread going to work and are looking for jobs elsewhere.

In recent years, the company has slashed the number of contractors employed at the refineries, said Mr. Freites, general secretary of the Oil and Gas Workers Union of Falcón State. But with production at a crawl, he said, even salaried workers are left with little to do, and many spend their days playing cards and dominoes.

Pdvsa’s downfall is rippling through this once-thriving company town. Roads are plunged into darkness at night because thieves have made off with the wires that carry power to the street lamps. Shops in the city’s downtown, once abuzz with commerce, are now shuttered.

Residents have migrated abroad in search of work and better lives. Hundreds of oil workers have signed three-year contracts in recent weeks to work for $10 an hour in construction helping the Caribbean island of St. Martin rebuild following the hurricanes.

José said he went to work every day wondering which of his colleagues would be the latest to leave; he compared the experience to a reality show. Pdvsa, he said, is now an empty shell.