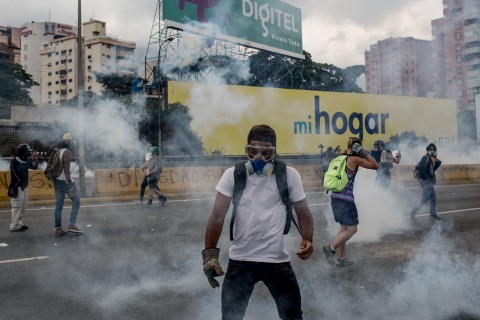 As the poor join protests, Venezuela may be hitting a turning point

CARACAS, Venezuela — In the cramped hillside slums where they once adored Hugo Chávez, hungry families now jeer and bang pots at the man struggling in his shadow, President Nicolás Maduro.

Chávez, a master showman who promised his country a socialist “revolution,” loved to wade through crowds of poor Venezuelans, blowing kisses and dispensing hugs. But when his successor has ventured out in public in recent months, he’s been pelted with eggs and chased by angry mobs.

“Maduro is so different,” said Irene Castillo, 26, who lives in El Guarataro, a tough neighborhood not far from the presidential palace. She voted for Maduro in 2013 when Chávez died after 14 years in power. But no one on Castillo’s block supports the government anymore, she said. “Now, those who remain ‘chavistas’ are just the radicals.”

As the country’s bloody, volatile month-old protest movement hardens into a prolonged standoff between demonstrators and the government, the loyalties of poorer Venezuelans like Castillo have become a swing factor in determining whether the president will survive.

The thousands of demonstrators pouring into the streets in recent weeks are mostly middle class, outraged by Venezuela’s economic collapse and the government’s increasingly authoritarian rule. But Venezuelans from longtime chavista strongholds are starting to join them, at considerable risk. Residents of Castillo’s neighborhood protested openly against Maduro for the first time this week.

Pro-government block captains in neighborhoods like El Guarataro have responded by threatening to deny food rations to those who march with the opposition or fail to join pro-Maduro rallies. Militia groups armed by the government known as “colectivos” are deployed to intimidate would-be defectors and are suspected in the deaths of several protesters.

As the confrontation escalates, many other destitute Venezuelans remain on the sidelines, disillusioned with Maduro but unpersuaded by his opponents, or too busy looking for food to join a march.

Aside from a military revolt, there is perhaps nothing Maduro fears more than a rebellion spreading through the neighborhoods that long backed Chávez. There are signs it’s already happening.

On several occasions this month, a pattern has emerged, in which mostly middle-class Venezuelans and student activists swarm the capital’s main highway during the day, while poorer residents stage smaller protests in their neighborhoods at night, some of which have degenerated into chaos and looting.

In El Guarataro, where services like electricity and water are frequently shut off, residents built barricades of flaming debris in the streets this week , clanging pots and pans at their windows to amplify their frustration. Riot police and national guard troops arrived, touching off clashes in a neighborhood that has long been a solid-red bastion of support for the government.

“The base of the chavista movement has eroded, and the situation is growing more explosive,” said Margarita Lopez Maya, a political analyst in Caracas. “There’s no bread, but the government continues to insist it has the majority of Venezuelans on its side, so it looks increasingly dissociated from the reality of people’s lives.”